In this article we carry on our series of posts with real-life SLA 3D printing cases. They cover all steps of 3D printing process until final result is achieved. This article is also dedicated to new users as well as experienced ones. This time, we will introduce you with the development of one very promising piece of technology called ViLim Ball.

ViLim Ball is a therapeutic device which was created for reduction of symptoms for essential tremor, Parkinson’s disease and rheumatoid arthritis. It helps to reduce hand tremor at least by 20 % for most of the patients. Furthermore, ViLim Ball reduces morning stiffness which is caused by Rheumatoid arthritis (RA). According to pre-clinical trial, 9 of 10 reported the lower stiffness after the 10 minutes of therapy.

One of the most important parts of this device is its housing. As the name states it is a ball or a sphere. The creators of the device tried FDM 3D printing to manufacture these housings. However, due to uneven surface and visible layer lines, they decided to 3D print the ball with LCD 3D printer. Both of those methods will then be compared, and the quality and usability of the product will be evaluated.

The patient will be physically interacting with the ViLim Ball, so there are quite a few requirements to fulfill. We accepted this challenge and decided to help with the development of prototype housing. 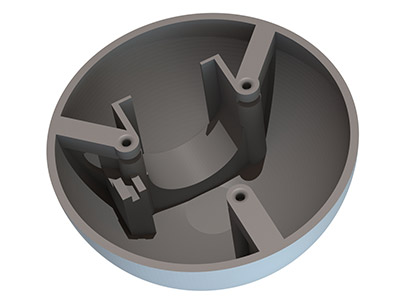 We chose to describe 3D printing process of lower section of this housing as it is more challenging and interesting than the upper one, which consists of several bosses for screws.

Final part had to meet some critical parameters. Users of ViLim Ball will interact with external surface of the device. Therefore, final surface of the part has to be as smooth as possible, there should be no visible layer lines or support marks. 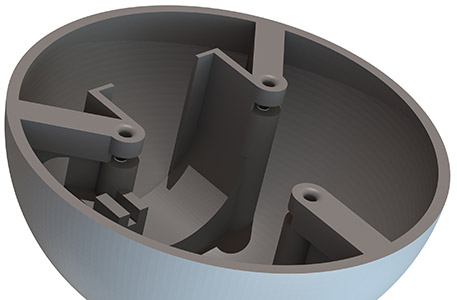 The part also has some critical functional features. Its inside consists of bosses and holders for electronic components. These must be as precise as possible, otherwise it will be impossible to install required components. However, inner surface quality is not particularly important, so marks of supports and other imperfections are acceptable here.

Dimensional stability also plays a significant role. Since we have two sides of the sphere and both when joined together must match precisely. Warping and any other kind of deformations are unacceptable.

Proper material choice was especially important. It is highly likely that this device will face impact damage, natural wearing, ambient UV light, humidity etc. For these conditions we had to make custom high-toughness and strength resin. As the final part will be coated, color was not an issue in this case.

In the past we learned that spheres are quite tricky to print. Firstly, one must preserve even and smooth outer surface, therefore, this part must be oriented in such a way that supports would touch only the inner part of the sphere. Secondly, inner section must be produced as precisely as possible otherwise, installation of electronic components will be impossible or even final performance can be jeopardized. Finally, we expect to see a lot of supports here, so we must be able to remove them properly and not to damage functional features. 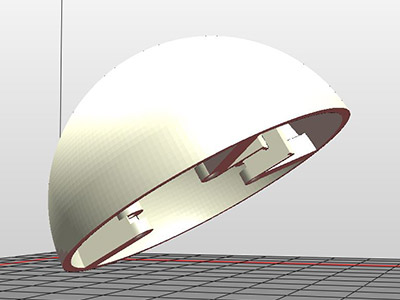 We do not have any flat planes on this object to use for its placement on build plate while fulfilling all requirements. Therefore, we will have to position it at an angle. We have chosen to orient this half-sphere at 30º degree angle. Steeper angle might also work, but that would increase height and prolong printing time. We cannot choose too steep angle as supports on outer surface must be avoided at any cost. Finally, with this orientation there will be no sudden changes in cross-sectional area within layers that could do damage.

When it comes to minimizing supports with proper orientation, we realized that there is no specific orientation that will help to substantially reduce them. So, we have chosen to keep this 30º degree orientation as our main choice.

Supporting of this half-sphere needs careful planning and a lot of considerations to achieve the best result. Honestly, it may also require more than one attempt to produce flawless 3D printed housing.

Previously chosen 30º degree angle orientation also makes our life with supports a bit easier as most of supports will start from the base plane, which typically results in tougher and more reliable supports. Supports that start from the object instead of the base plane will fail more frequently especially if the overhang it supports has quite large cross-sectional area. In these cases, small bottom-tips of supports that hold it in place fail and the entire overhang can be damaged. 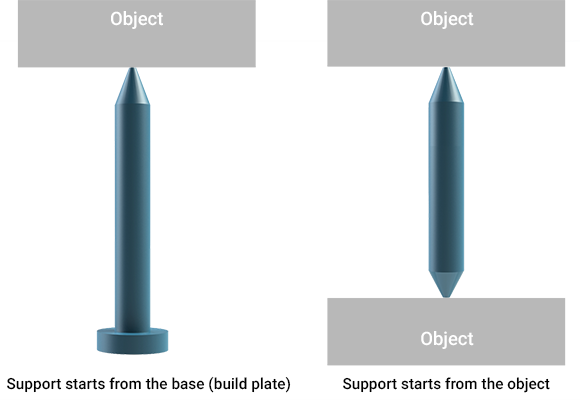 In our experience, the most difficult part with spheres is to print the outer edge that would lay flat on the surface after 3D printing. Any minor warps or inconsistent support patterns typically lead to severe misalignments.

We started with automatic support generation at the highest density. We never fully rely on automatic generation algorithms. After software placed the supports, manual adjustments were made. We started with outer edge supports. Tips of all supports within object ranged from 0.4 to 0.5 mm.

Each blue dot represents a support. We took these images after manual adjustment of the supports

As you can see, density of supports around the edge is high. We are doing that to sustain geometry and obtain edge that would lay flat on the surface. Moreover, high density of supports will help us avoid undesired visible marks and lines on outer surface. This usually happens when density on edges is too low and that results in higher stresses on previously cured layers and their connections during cured layer separations from FEP or PDMS. More supports will help to distribute that stress more evenly.

Based on requirements, we had to precisely preserve inner functional features. These features will be used to join the second part of sphere and install electronic components.

We had to make careful considerations here. A lot of overhangs are present at this functional side of the sphere. Each tip (i.e. starting point) of overhang needed at least two or three supports.

Flat walls of inner features had to be preserved as well. You can see that we used additional supports to support walls of concave mounting bracket, gussets of bosses and walls of all remaining features.

Last but not least, we carefully supported inner convex to sustain proper geometries during 3D printing when stresses arise during cured layers’ separation from the bottom of resin tray.

Below you can see fully supported part. 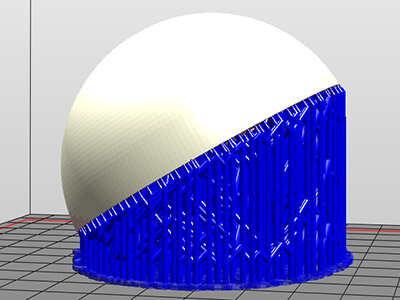 To get good results hollowing is an important aspect of SLA/DLP 3D printing, but it was not mandatory for this part. There are no thick sections within this object that pose risks of severe shrinkage or even cracks.

We have added attachment layer for this part based on our recommendation covered in this previous article. Supports that were used have really thick and even base. Due to this reason, if there was no attachment layer for this part, separation forces from FEP of bottom layers would put huge stress on very first layer that is attached to the build plate of the printer. The likelihood of 3D printed object falling down from the build plate would be really high. Attachment layer will help to increase adhesion forces between the base of the object and build plate. 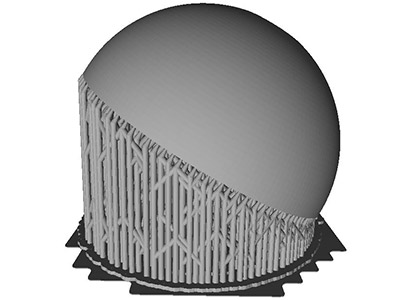 We printed this part on Anycubic Photon LCD/LED 3D printer. Layer height was set to 50μm. Exposure time for a single normal layer was 6 seconds. We cured base layers for 120 seconds.

Although we used Anycubic Photon 3D printer, this housing can be easily printed on any kind of SLA or DLP 3D printer like Wanhao D7, Phrozen Shuffle, Prusa SL1, Peopoly Moai etc. etc. You just might have to select correct layer exposure times and other parameters.

There are no special post-processing procedures for this 3D printed housing. After 3D printing, we removed it from the build plate. It was cleaned with IPA: we left it submerged for 10 minutes and then swirled around a bit.

In this case it was good to leave supports while post-curing in UV oven to prevent warpage as supports would help to preserve structural integrity of the object. We post-cured in UV oven (50 W of 395 nm LEDs) for ~2 hours. 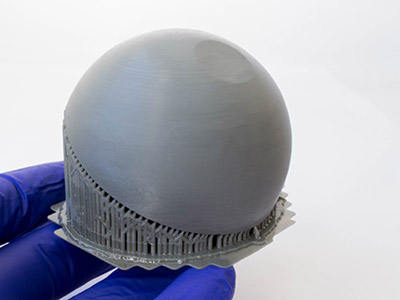 After post-curing we removed supports. As there were a lot of them and they were quite thick, we delicately removed them with a pair of pliers. Support removal process had to be done carefully in order not to damage inner features.

Below you can see fully finished 3D printed housing. 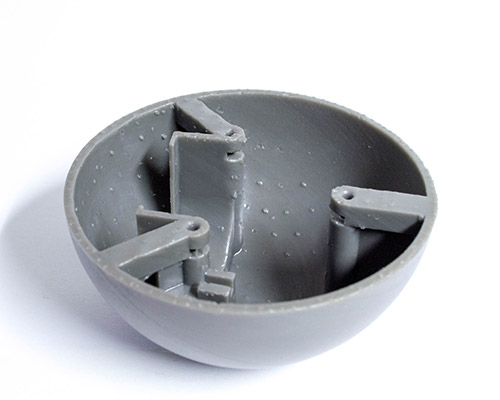 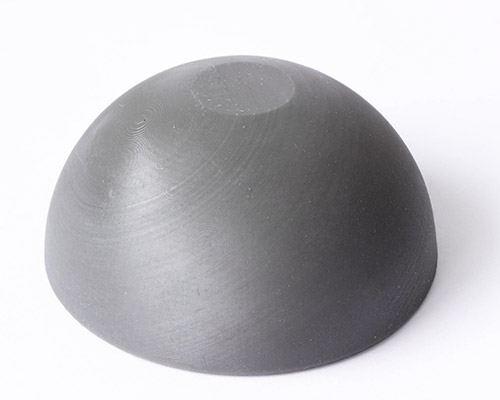 We also would like to emphasize that probably there are more correct ways how to print this object: one may choose different supports strategy or orientation. Each of us might have unique experience and personal preferences. So if you wish to share your own insights, just drop a comment below, we will be happy to discuss that as we are learners as well.

And if you have some spare time, check out our other articles to learn even more:

Also, have a look at our SHOP. We have some great resins to choose from!

Topics:
Anycubic Photon
SLA Resin
UV led printer case study
UV resin 3D printer
x
This website stores cookies on your computer. These cookies are used to collect information about how you interact with our website and allow us to remember you. To find out more, see our Privacy Policy.. I AGREE