Can IPA cause cracks on my 3D prints?

Although many of us use IPA (isopropyl alcohol) to clean our DLP 3D printed models, not many know what impact it may have on their 3D prints. In this edition we will conduct an experiment on how IPA can affect our SLA 3D prints.

Recently we noticed a lot of comments online where people were concerned about dramatic shrinkage of their parts when using various 3D printing resins. This unexpected shrinkage is different than caused by natural shrinkage of material due to post-curing, i.e. hardening.

When SLA printed part shrinks due to ongoing curing, cracks typically occur at spots where the biggest stresses arise. For example, such spots can be sudden transitions from thick wall to thin wall like “T” joints, i.e. when thinner wall is somewhat perpendicular to the thicker one. Causes of stress-based cracks are very diverse and are definitely worth a separate blog article, therefore, we will cover this in the future. 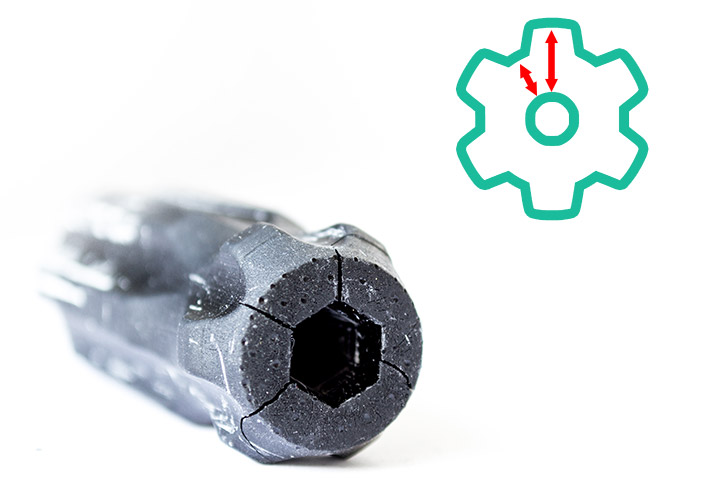 The type of shrinkage we are interested in this experiment is completely parasitic. It is caused by IPA which we use when washing and rinsing. We have also noticed similar shrinkage when washing 3D printed objects with tap water, but level of damage was different. All in all, as IPA is a standard cleaning solution for 3D printed objects, in this article we will focus only on IPA.

It is also interesting that this shrinkage has its specific looks. Surface typically looks chapped or even wrinkled. Cracks are deep and even inner parts usually look damaged. Sometimes we call it desert-like surface. In the worst case scenario 3D printed object can quite easily break right in your hands without even applying serious stress.

In chemistry it is well known that if you submerge something hard/solid into something liquid, it will absorb that liquid. How much will be absorbed depends on many factors, but the key point is that absorption will happen no matter what. The longer you keep it in liquid, the more it will absorb it.

Such absorption phenomena is also inevitable in washing/cleaning procedure of SLA 3D printing. When we finish our 3D prints and put them into IPA, the longer we keep it in IPA solution, the more IPA will be absorbed into the part. Absorption is increased because of soft surface of fresh 3D prints as softer materials tend to absorb surrounding liquids a lot easier.

This absorption causes 3D printed part to swell. During swelling cross-linked network of polymer expands. But when you take your part out of IPA, absorbed liquid evaporates and polymer network tends to shrink and go back to its primary shape. This shrinkage results in severe cracks and damage to surface as polymer network is not able to recover to exactly the same original structure.

It is also worth mentioning that we have executed FTIR analysis for this issue. It covered various samples that were affected by IPA. All in all, our research showed that there were no obvious changes in chemistry of those samples. So we concluded that effect might be a reason of physical and not chemical alteration.

Moreover, we’ve discussed and re-confirmed that absorption of liquid may be a reason behind this surface cracking effect with professors at the faculty of chemical technology of Kaunas University of Technology.

Composition of the material

Nevertheless, it is difficult to state exact reasons why that happens. We learned that it can be caused by raw materials used as well. Some formulas with certain raw materials tend to be more sensitive to IPA, whereas others produce 3D printed objects that are only insignificantly affected. If you have your own version, drop as a comment below, we would be glad to discuss and learn more.

After discussing the above mentioned facts we decided to make an experiment and investigate how IPA affects various 3D printing resins in different 3D printing, washing and post-curing settings.

The goal of the experiment

The main goal of this experiment is to examine IPA effect on various 3D printing resins that are currently available on the market. Throughout the experiment we will try various settings of washing (with IPA), post-curing and 3D printing. After this experiment we expect to make conclusions and findings on how to reduce potential negative isopropyl alcohol impact on SLA 3D prints.

Progress of experiment and summary of conditions

For this experiment we chose a very popular model: T800 Terminator EndoSkull by awesome3dgeek. Model was printed as is with attachment layer added. It was not hollowed and was roughly scaled to dimensions of 25mm x 22mm x 17mm.

We used standard IPA solution with concentration of 99%. This is what you would typically buy at hardware or electronics store. We did not dilute it with distilled water or other liquids. IPA was kept at room temperature.

We have selected 8 resins currently available on the market. The black/dark versions were selected on purpose so as to reduce chances of guessing the potential brand. All materials were used as is, i.e. no additional pigments or other components were added. All 3D printing resins were purchased within 2‑3 months. AmeraLabs 3D resin was also among these materials.

For this experiment we decided to use DLP 3D printer, which uses Acer H6518BD projector. All models were printed at 50um layer height and 50um XY resolution. Exposure time for each layer was around 2‑3 seconds. We measured what was the minimum time needed for a given material to cure 50um layer. This time was separately calculated for each material and in the same way.

Each 3D resin was tested in the following way.

All in all, the main difference among tests was how long each specimen was submerged in IPA and if post-curing was performed. Below is the summary of all tests.

After all tests were completed, all specimens were left at room temperature for 48 hours. After two days we investigated each specimen individually and provided you with the results below. 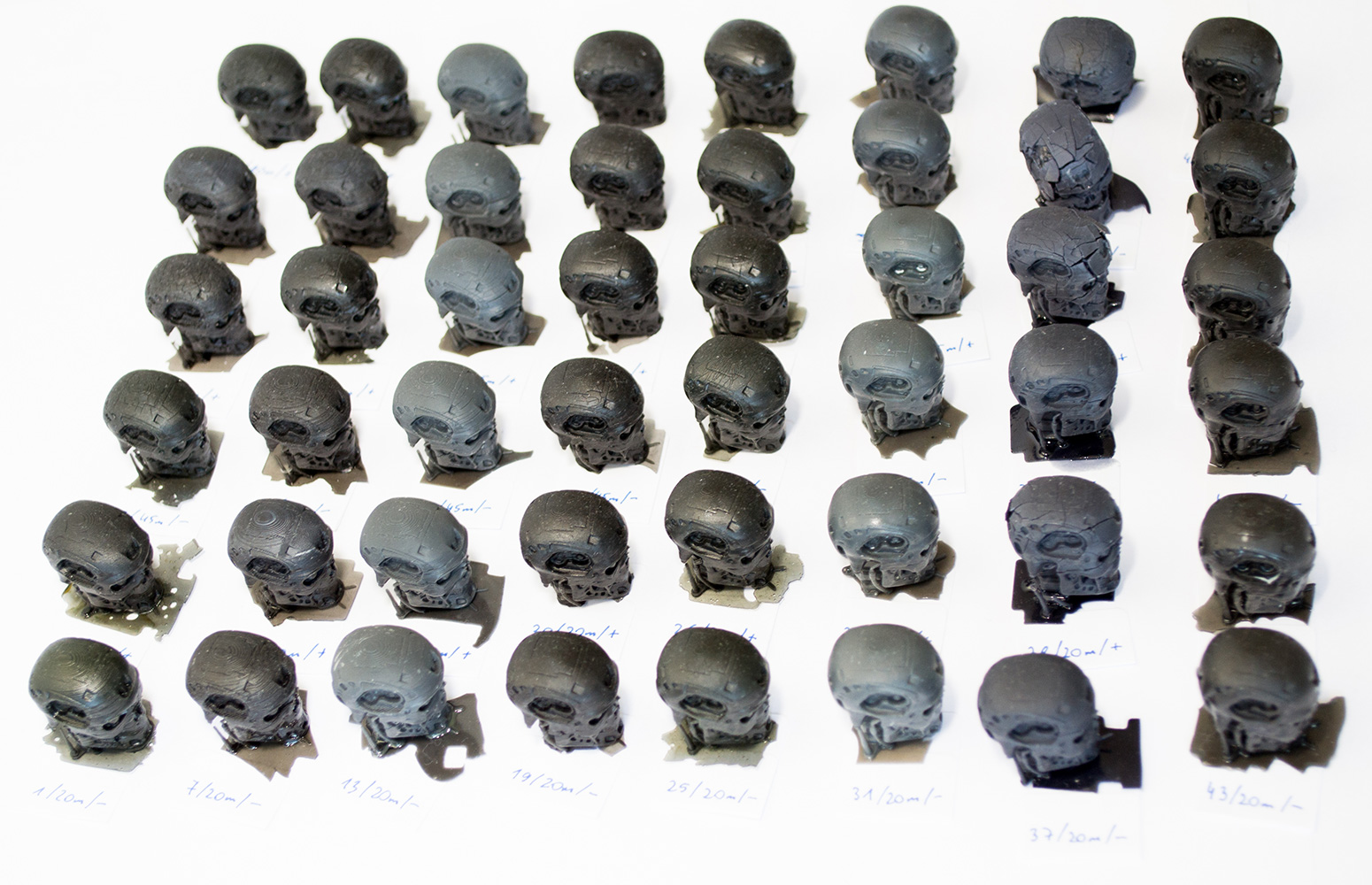 After 48 hours we did thorough examination of the quality of each specimen and its surface. Although, there are quite a few models, we can quite easily group results and make conclusions.

First thing to mention, the investigation of impact of post-curing was inconclusive. Some of the post-cured models showed a little bit better results than their non-post-cured counterparts. While others developed similar surface cracks despite the fact that it was post-cured for 90 minutes immediately after washing with IPA. Bellow you can see several side-by-side comparisons. You can click on images to enlarge them.

Although we have to mention, that some resins managed to preserve quite a healthy surface even after 90 min. of exposure to IPA.

See images for comparison below.

Examination of all specimens made it possible to make some reasonable conclusions. We think these conclusions and learnings will be useful for you and will help to minimize potential damage to your prints.

Major finding was that IPA (isopropyl alcohol) can and does affect the final quality of your prints. Inner and outer parts of your 3D printed object can be significantly affected. If you keep your printed objects submerged in IPA for prolonged periods of time, damage to your prints is usually unavoidable.

It is also worth mentioning that these results are also greatly dependent on hardware settings. We used DLP printer for this experiment, which uses Acer H6518BD projector. This projector emits a lot of light that helps to effectively cure and polymerize material. Right after printing process objects come out in good shape and with pretty hard surface. Printed 3D objects with harder surface will absorb less IPA and potential damage can also be reduced. The opposite can happen with LED/LCD printers which use low-power light source together with fast curing materials. These often produce very soft and flexible objects right after printing process. This can result in a more severe absorbency of IPA into the 3D printed object during the washing procedure. That can obviously result in more severe shrinkage and damage to 3D printed object.

This experiment applies to IPA solution only. We did not test how 3D printed objects will be affected with other washing solutions such as ethanol. Therefore, results may differ when different liquids are used.

Although, most of our randomly selected 3D printing resins showed some degree of shrinkage and damage because of IPA that does not mean that there are no 3D resins that can avoid such shrinkage. We can shamelessly admit, that the new version of our AMD-3 LED resin shows first signs of surface damage only after sitting in IPA for several days. While we do not know exact composition of each third party resin, it is difficult to judge if one or another component can cause such issue. We do not know if all of them consist of common components as well.

Have you noticed this surface cracking effect? Please share your experience in the comments.

This is all for today ladies and gentlemen! Don’t forget to check our shop and other blog posts: